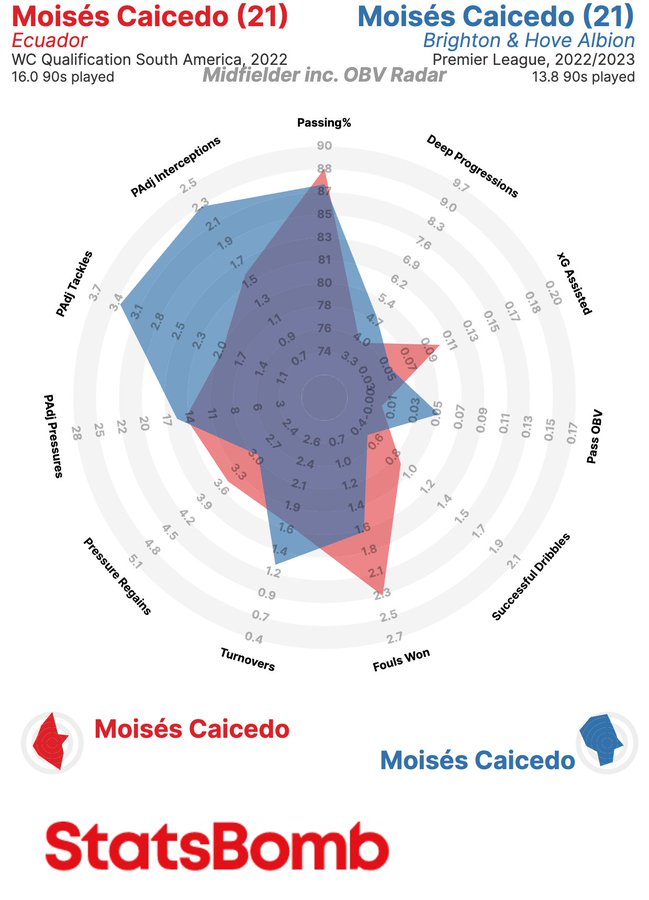 The World Cup is everyone’s time to shine.

That’s especially the case for young players. Kylian Mbappe rose to superstardom in 2018 and helped France win the tournament. James Rodríguez-mania swept through Brazil in 2014 and led to a massive transfer to Real Madrid.

Mbappe was well-established in the soccer world already but the World Cup pushed him to another stratosphere and that might be the case for a few players in 2022.

Here are 10 potential breakthrough candidates at the 2022 World Cup, aged 23 and under.

Part of a young Croatian defence, Josko Gvardiol was strongly linked to Chelsea in the summer before signing a new contract with RB Leipzig. A strong display at the World Cup will only heighten any outside interest.

The 20-year-old’s best trait is his ball-playing attributes and instantly made waves with his distribution in the Bundesliga last season. He’s often encouraged to take up higher positions in Leipzig’s defence and will certainly do the same with Croatia.

But Gvardiol remains a stern defender despite that heavy involvement in possession. He logged a 56.4 per cent tackling success rate against opposing dribblers last season, per FBRef.com. That’s solid for a player who plays in a side that presses aggressively and plays with a high line.

Mohammed Kudus enters the World Cup in brilliant form with nine goals in 20 matches in all competitions for Ajax. Fitting that he’s leading the line for Ghana, then.

But it’s Kudus’ dribbling that really catches the eye. The underlying numbers, albeit from a small sample size in the Eredivisie, are ridiculous.

Kudus’ uncanny ability to pop up in quality areas and convert clinically could be a huge factor in Group H with Portugal, Uruguay and South Korea on high alert.

There could’ve been three or four Spanish players on this list alone, but it’s hard to ignore Gavi given his rapid rise to prominence.

Gavi turned 18 in August, yet he’s already played 66 matches for Barcelona dating back to last season, along with 13 caps for Spain. This World Cup will surely catapult the kid into the spotlight.

Whether it’s his technique, vision or willingness to progress the ball, Gavi will captivate everybody who watches Spain.

The 2022 World Cup might be one tournament too early for Ecuador to make some noise based on how young the squad is, but there could still be a few standouts.

And Moisés Caicedo should be atop the list. The 21-year-old was sensational in Brighton’s season-opening 2-1 win over Manchester United at Old Trafford on Aug. 7 and has steadily gained more attention ever since.

Caicedo’s work rate off the ball, defensive sturdiness and distribution have drawn rave reviews. He’s a complete midfielder in every sense of the term and should be one of the top performers for Ecuador.

There are few wingers who will lift fans to their feet like Cody Gakpo can.

The PSV forward has been repeatedly tipped to join Manchester United and for good reason. The 23-year-old is a lethal scorer, chance creator and a threat on the dribble.

With his all-around skillset, Gakpo will be one of the main protagonists for the Netherlands if they mount a deep run at the World Cup.

Dubbed “The Japanese Messi,” Takefusa Kubo makes up one of the most entertaining attacks at the tournament.

Kubo is the headliner, though. The dynamism he exhibits on the ball, whether he’s cutting inside from the left flank or in his natural right-sided role, is breathtaking.

Kubo may not be a goal-scorer, but he’ll be one of the focal points of Japan’s attack with his creativity and dribbling.

Few U-23 players are in better form entering the World Cup than Jamal Musiala, and yet he’s one of the youngest.

Through 19 games for Bayern, Musiala has nine goals and eight assists from midfield. It’s an astounding return for anyone, let alone a midfielder.

Germany will be hoping he can carry that form into the tournament, especially in a tricky Group E with Spain, Japan and Costa Rica to contend with.

To say Jonathan David is having a dominant season with Lille is an understatement.

David’s a clinical finisher but his defensive work rate always draw praise from coach John Herdman and his chance creation might be his most underrated quality as well. The underlying numbers show that well.

David has some of Europe’s biggest clubs monitoring his progress, so if he can help Canada upset the likes of Belgium and Croatia, that’ll only add to his value.

Don’t be surprised if Julián Álvarez ends up starting for Argentina at the World Cup, even with the likes of Lautaro Martínez, Ángel Di María and Paulo Dybala among the forward ranks.

Álvarez is capable of playing out wide or up front, drifts between the lines with the ball smoothly and finishes with aplomb.

Regardless of his status, Álvarez will be an x-factor for the Argentines at this tournament.

It’s safe to say that all eyes will be on Jude Bellingham.

England’s midfield has long been considered too lightweight or incapable of bossing matches against top-tier opposition, but Bellingham might change that perception.

Even at 19, Bellingham is so poised and obsessed with progressing the ball. If England has any hopes of replicating the form from Euro 2020 and the 2018 World Cup, it will lean heavily on the teenager to deliver the goods.

FIFA World Cup Group F Preview: Canada back on biggest stage, but how will they match up?

Advertisement
Related Topics:BreakCupListplayersQatarwatchWorldYoung
Up Next

Quick Shifts: Who the Maple Leafs are targeting to upgrade their defence