After two games on the road, the Air Force Falcons are heading back home. Air Force and the UNLV Rebels will face off in a Mountain West battle at 3:30 p.m. ET on Friday at Falcon Stadium. The Falcons should still be riding high after a win, while UNLV will be looking to right the ship.

It may have taken triple overtime to finish the job, but Air Force ultimately got the result they were hoping for last Friday with a 41-39 victory over the Nevada Wolf Pack. The team accrued 17 points in the first half and coasted on those for the victory. WR DeAndre Hughes had a dynamite game for Air Force; he rushed for two TDs and 279 yards on 23 carries. Hughes’ longest run was for 52 yards in the second quarter. Hughes’ sharp performance set his single-game rushing touchdown high for the season.

Air Force’s defense was a presence as well, as it embarrassed Nevada’s offensive line to sack QB Carson Strong seven times for a total loss of 46 yards. The heavy lifting was done by DT Jordan Jackson and DL Christopher Herrera, who each racked up two sacks.

Air Force is the favorite in this one, with an expected 17.5-point margin of victory. They might be worth taking a chance on against the spread as they are currently on a two-game streak of ATS wins.

Air Force is now 8-3 while UNLV sits at 2-9. A pair of stats to keep an eye on: The Falcons are 243rd worst in the nation in passing yards per game, with only 90 on average. The Rebels have experienced some struggles of their own as they are stumbling into the matchup with the 192nd most passing yards allowed per game in the nation, having given up 259.4 on average. It’s possible one of these Achilles’ heels will wind up tripping the losing team up.

The Falcons are a big 17.5-point favorite against the Rebels, according to the latest college football odds.

Air Force have won both of the games they’ve played against UNLV in the last seven years.

Michigan and Georgia are clear playoff teams. We’ll soon find out who the CFP Selection Committee thinks deserves a spot beside them.

No. 11 Utah Utes take down the No. 4 USC Trojans for the PAC 12 Championship | Number One CFB Show

RJ Young reacts to the No. 11 Utah Utes taking down the No. 4 USC Trojans for the PAC 12 Championship.

Luke Schenn of the Vancouver Canucks, after a six-hit night, has been crowned the hit king amongst NHL defencemen, passing Brooks Orpik for most hits since the stat has been recorded.

Some 2,947 hits later, the journeyman hasn’t stopped doing what he does best and is now able to say he stands at the peak of his craft. He hit the mark in 888 games.

A couple of days ago Schenn told Sportsnet that he “didn’t really think too much of it,” and that he “doesn’t really care too much about the number,” however as he broke the record, the fans in attendance made sure to let him know how much they cared.

Chants of “LUKE! LUKE!” broke out at Rogers Arena in Vancouver for the new leader in the category.

The 33-year-old has played for seven teams throughout his career and won two Stanley Cups during his time with the Tampa Bay Lightning. On every team he’s been on, he’s done what he does best. Hit.

Five forwards still remain above him on the hits leaderboard: Milan Lucic, Alex Ovechkin, Matt Martin, Dustin Brown, and the recently coronated Cal Clutterbuck sits atop the rankings with 3,647.

It was a celebratory day for the Schenn family, as brother Brayden played in his 800th NHL game across the country as his St. Louis Blues took on the Pittsburgh Penguins. But Brayden still has a ways to go if he wants to catch up to Luke’s physical domination, as the centre only has 1,700 hits to his name. 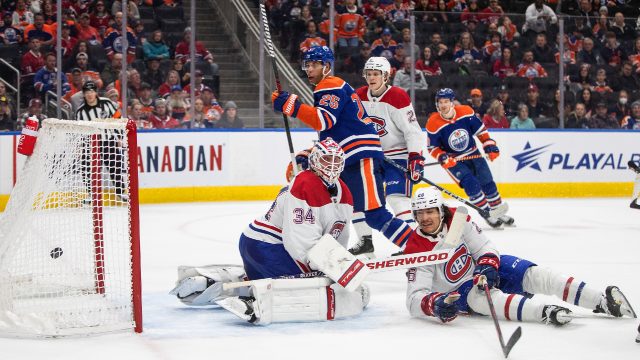 No. 11 Utah Utes take down the No. 4 USC Trojans for the PAC 12 Championship | Number One CFB Show