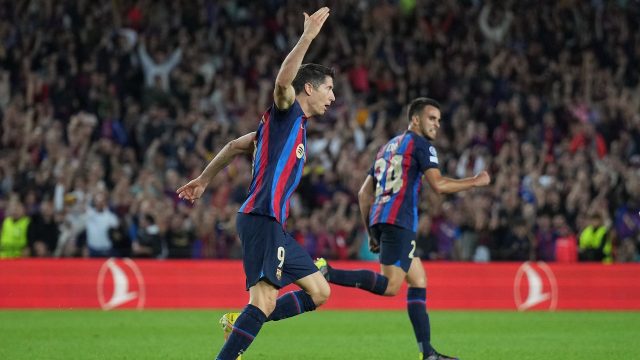 The 2022-23 UEFA Champions League rolled on this week, as the group stage of the tournament entered the home stretch.

Among the highlights from Matchday 4 were Liverpool’s Mohamed Salah coming off the bench to score a hat trick against Rangers in six minutes and 12 seconds to set a tournament record, Israeli club Maccabi Haifa upsetting Juventus to win its first Champions League game since 2002, and Bayern Munich and Napoli recording their fourth straight wins to advance to the knockout round.

Here’s what else stood out from this week’s round of matches.

FC Barcelona is alive — but just barely — in the Champions League following a thrill-a-minute 3-3 draw against Inter Milan on Wednesday in Group C.

The Catalans started the day in third place in the group, three points adrift of Inter after losing 1-0 to the Italians last week. A second defeat to Inter would have resulted in Barca’s elimination from the tournament with two games left in the group stage. Barcelona was also eliminated in the group stage last season.

When German international Robin Gosens scored in the 89th to give the Nerazzurri a 3-2 lead, it appeared as though the Spanish side’s fate had been sealed. But Robert Lewandowski scored via a header deep into injury time to help Barcelona stave off elimination, allowing them to fight another day.

Barcelona took the lead just before halftime when Ousmane Dembele tapped home off a setup by Sergi Roberto. Inter replied early in the second half with goals from Nicolo Barella and Lautaro Martinez. Lewandowski drew Barca level at 2-2 when his attempt on goal in the 82nd minute was deflected past goalkeeper Andre Onana.

From there the game descended into chaos, with Gosens scoring in the final minute of regulation and Lewandowski equalizing right at the death.

“This Champions League is being cruel to us. We conceded a lot in the second half but the first was excellent. The first goal is a clear error from the defensive line that we had talked about. …. But that is the Champions League. We should have carried out the match from the first half, but it was not to be,” Barcelona manager Xavi told Spanish media outlet Movistar+ after the match.

The absence of Canadian fullback Alphonso Davies didn’t slow down Bayern Munich one bit as the Bavarian giants rolled to a 4-2 road win over Czech Republic side Viktoria Plzen in Group C action on Wednesday.

Davies, a 21-year-old from Edmonton, was ruled out for Bayern’s midweek clash after suffering a cranial bruise during a Bundesliga game at Borussia Dortmund on the weekend. Davies was hurt just before halftime as he challenged Dortmund’s Jude Bellingham. The English midfielder inadvertently kicked Davies in the face to try to win the ball, sending the Canadian international crashing to the ground.

Elsewhere on Wednesday, Club Brugge earned a 0-0 draw against hosts Atletico Madrid in Group B to clinch a spot in the knockout stages. Canadian Tajon Buchanan started for Brugge at wingback and impressed in 83 minutes of action, threatening for the Belgian side as they ventured forward in attack and dropping back to help the team defend when Atletico was in possession.

Also in Group B, FC Porto shut out Bayer Leverkusen 3-0 in Germany, with Canadian midfielder Stephen Eustáquio putting in a solid defensive shift for the Portuguese club before being subbed out in the final minute of regulation time.

Milan can have no complaints about red card at San Siro

AC Milan stormed out of the gate and went toe-to-toe with visitors Chelsea in their Group E contest on Tuesday, eager to earn revenge for a 3-0 loss at Stamford Bridge a week ago.

But the game turned in the English club’s favour in the 18th minute when former Blues defender Fikayo Tomori was red carded for tugging the shoulder of Chelsea’s Mason Mount. That not only earned Chelsea a penalty, but Tomori was red carded as German referee Daniel Siebert determined that the Milan defender illegally prevented a clear scoring chance from developing. The VAR booth took a look and upheld Siebert’s decision. Jorginho converted the spot kick and Pierre-Emerick Aubameyang doubled the visitors’ advantage in the 34th to guide Chelsea to a 2-0 win.

Milan coach Stefano Pioli was furious as he walked over to Siebert after the final whistle blew at San Siro, and protested the decision he felt completely transformed the match.

“The game had just started and I had the feeling we were doing well. The red card and penalty changed the game, against a team that was already strong and did not need to have an extra man, too,” Pioli told Italian broadcaster Mediaset Infinity.

But Pioli can have no complaints. It was a foolhardy move by Tomori to try to stop Mount with the use of his hands, and he made no legal attempt to obstruct the Chelsea midfielder. Tomori has to accept some of the blame for his panicky attempt to prevent Mount from shooting when he was through on goal. Had he kept his hands to himself, things might have played out differently for Milan.

It was a valuable point for Dortmund, who sits in second place in the group with a five-point edge over Sevilla with only two games remaining.

For Bellingham, 19, it was his fourth goal in this season’s tournament, but also a history-maker. He became only the third teenager to score in four consecutive UEFA Champions League appearances.

The others? No less than two of the world’s top strikers at the moment: Erling Haaland (five appearances for Red Bull Salzburg in 2019) and Kylian Mbappé (four appearances for AS Monaco in 2017).

Little wonder the teenager is drawing the attention of big English clubs such as Arsenal and Liverpool. If Bellingham continues to impress like this in the Champions League — and has a strong showing for England at the FIFA World Cup next month — the list of potential suitors will surely grow even longer.

John Molinaro is one of the leading soccer journalists in Canada, having covered the game for over 20 years for several media outlets, including Sportsnet, CBC Sports and Sun Media. He is currently the editor-in-chief of TFC Republic, a website dedicated to in-depth coverage of Toronto FC and Canadian soccer. TFC Republic can be found here.

Advertisement
Related Topics:BarcelonaChampionsdrawInterLeagueMilanplaytakeawaysthrillingUEFA
Up Next

David Beckham sent off: No. 40 | Most Memorable Moments in World Cup History