Although the MLB off-season has ground to a halt under the weight of a lockout that came into effect on Tuesday, that doesn’t mean that work is done for front offices.

The current environment will curb transactions for the time but teams — including the Toronto Blue Jays — will continue to plan out the possible courses they will take to improve their competitive chances when an agreement is reached. In Toronto’s case, despite signing Kevin Gausman and Yimi Garcia, there are both clear holes remaining on the roster, and resources to put against filling them.

The conceivable paths the Blue Jays could take to finish off their roster are numerous beyond measure, and there is no way to predict exactly what they’ll do. That said, we thought it would be a fun exercise to flesh out a couple of the avenues available to the team with three possible plans — each putting an emphasis on a different area of need (SP, RP, 2B/3B), but addressing all three.

Before we lay them out, the rules are fourfold:

1. The Blue Jays won’t add more than $25 million dollars to the payroll. There is an endless debate to be had about what the team could conceivably spend, but this represents a reasonable cap on what they might add to the current cost of the roster.

2. Only one trade is allowed. In theory it’s easy to add a number of low-cost players if you’re willing to empty out the farm system, but the Blue Jays are unlikely to do that — especially after the José Berríos trade in July. That doesn’t mean a major trade is off the table — it isn’t — but more than one is a stretch.

3. All players traded for must be either rumoured to be available, or have limited team control and reside on teams unlikely to compete in 2022.

4. Free agent contracts, where possible, will be based on an average of FanGraphs and MLBTradeRumors contract projections. Neither is perfect, but both averaged together helps ground contract proposals in something concrete.

With all the rules and regulations out of the way, let’s get to the fun part.

MLB’s short but frenetic off-season
With a lockout looming, many thought this MLB off-season would unfold slowly. Instead, the condensed timeline made it one of the busiest in memory.
| The most noteworthy deals of the off-season 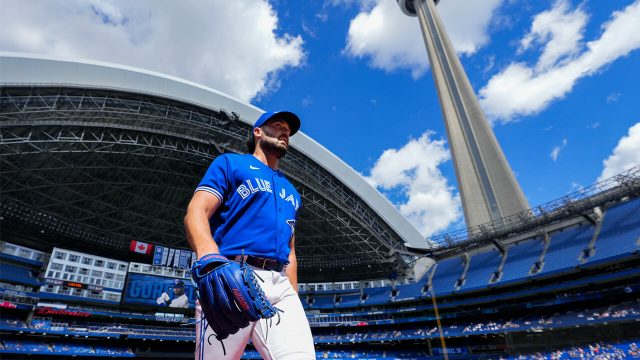 Plan A: Focus on the infield

How it works: Although Chapman’s salary in 2022 (projected at $9.5 million) isn’t the biggest cash outlay in this plan, the prospect capital put against his acquisition is significant.

Groshans seems to find his way into this trade because Gabriel Moreno and Orelvis Martinez are borderline untouchable, but the Athletics need a blue-chip prospect for a player who ranked eighth in the majors in position-player WAR between 2018-2020. He’s also a potential replacement for Chapman at the hot corner as soon as 2023.

Smith is the type of player Oakland has often liked in the past considering he’s versatile and heady as opposed to overflowing with raw tools. He could help the A’s in 2022, which is appealing for a club that is always re-tooling as opposed to tearing down.

Palmer is coming off a third-round pick coming off a solid pro debut in Dunedin where he flashed exciting strikeout ability (11.86 K/9), got ground balls at an excellent clip (50 percent) and didn’t allow a single home run in 63 innings. If he can get his walks under control, he could blossom as a prospect, and Oakland could see this as the right time to buy in on the right-hander.

That’s quite the package, but not what Chapman might have commanded in the past thanks to the troubling trend in the Gold Glover’s strikeout rate… 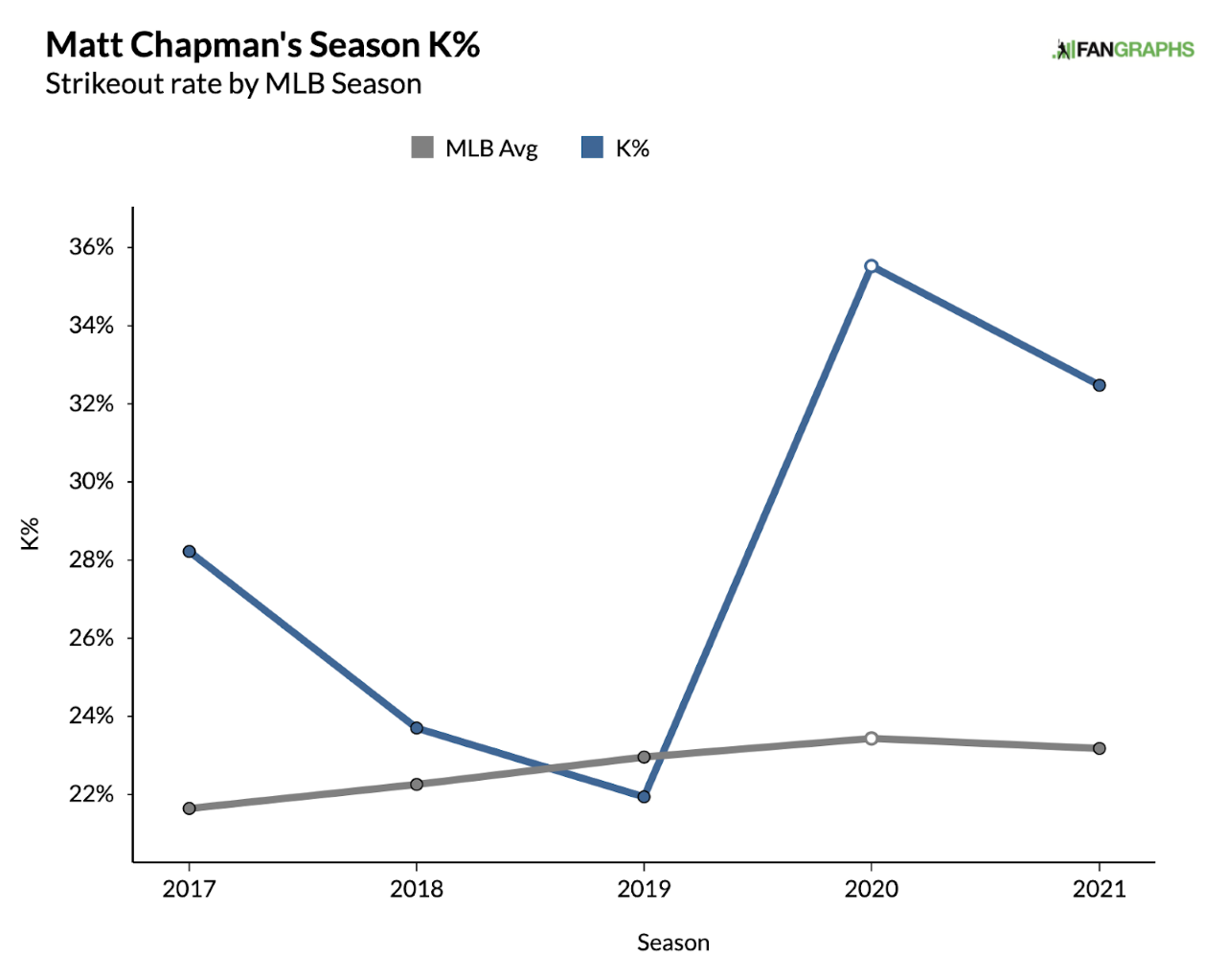 … but even if he never recaptures his prior offensive form, the 28-year-old has an unbelievable floor thanks to his world-class defensive prowess. He might frustrate Blue Jays fans as yet another right-handed hitter with power who struggles to get on base consistently, but it’s hard to knock the all-around fit.

MLBTR projected Duffy to get a one-year, $10-million contract, and FanGraphs to secure a two-year, $21-million pact, so in this scenario the Blue Jays split the difference in term by offering a higher AAV to keep it at one year. The team is already paying significant money to Gausman, Berríos, and Hyun-Jin Ryu through 2023, so it would make sense for them to avoid signing another starter to a multi-year pact.

While Toronto isn’t the most natural landing spot for a pitcher looking for a pillow contract, the Pete Walker-led pitching analysis and coaching apparatus may be changing that and the success Robbie Ray and Steven Matz had parlaying a year with the Blue Jays into big money doesn’t go unnoticed. Duffy’s health is a bit of a question mark, as his season ended prematurely with a forearm issue — and he had a left flexor strain earlier in the year — but he had excellent results when on the mound with a 2.51 ERA and 3.40 FIP in 61 innings. While his xERA of 4.24 suggests he got a bit lucky, the southpaw is still a strong back-of-the-rotation option.

Doolitte is one of many relievers you could tack onto this plan, but he gets the nod because of his velocity and durability returning after a lost 2020, his fastball still having solid spin and vertical movement, and his high-leverage experience being a nice bonus. He posted a 4.54 ERA and 4.38 ERA in 2021, and is likely to produce at a similar level as a floor-raising seventh or eighth reliever in 2022. As a budget reliever he doesn’t have a contract projection, so under this plan he gets a bump on the $1.5 million he accepted heading into 2021 coming off a brutal 2020 where he was injured and ineffective.

Plan B: Focus on the Rotation

How it works: The addition of Manaea would give the Blue Jays a stellar rotation, and the acquisition cost wouldn’t be as daunting as with Chapman because he’s only under team control through 2022. Lopez’s inclusion in this deal is similar to Smith’s in the Chapman deal, but he’s younger and has more upside. His versatility, contact ability, and proximity to the majors would make him appealing to the A’s.

Van Eyk is coming off a middling first year as a pro, but he’s a former second-round pick with the repertoire diversity to start at the highest level. Logue rounds out the package as a depth arm knocking on the door of the major leagues.

(Kyle) Seager isn’t a name that’s going to sell any tickets, but the 34-year-old is as reliable as they come. He’s exceedingly durable, a good bet to produce approximately league-average production at the plate, and still a strong defender at the hot corner. Add in the fact he’s a left-handed bat and there’s no long-term commitment necessary to land him, and he makes a tonne of sense as the Blue Jays’ next starting third baseman. If he can replicate the ability to cut strikeouts he demonstrated in 2020, there’s even a sliver of upside considering his 30-plus home run power.

Like Doolittle, Bedrosian is something of a throw-in here, and you can really pick whichever budget reliever is your flavour. The 30-year-old gets the nod because, during 2021, he added an intriguing splitter to his repertoire that induced a 33.3 per cent whiff rate and didn’t result in a single extra-base hit despite the fact he threw it 25 per cent of the time. It was a rough season overall, which is why he could be available for a modest price, but that offering has new promise and could improve his prospects in 2022 if it continues to develop.

Plan C: Focus on the bullpen

How it works: Giving significant multi-year contracts to big-name relievers doesn’t appear to be this front office’s MO, but bullpen meltdowns were the single biggest reason the Blue Jays fell short of the playoffs in 2021. The combination of Jansen — who’s coming off his best season since 2017 despite control issues plaguing him in the first half — and Jordan Romano would be dynamic late in games, and allow the rest of the relievers to filter into more comfortable roles.

The 34-year-old doesn’t throw especially hard, but doesn’t need to, thanks to a cutter that allows him to induce soft contact like no other pitcher in the game. Since 2017 his average exit velocity has been 99th or 100th percentile four times. The one time he didn’t reach those lofty heights, it was 96th percentile.

While Jansen is very much a known quantity — if an expensive one — Mondesí is a roll of the dice. Thanks to a combination of injuries and the Kansas City Royals’ tendency to shuttle him between the minors and the majors early in his career, the 26-year-old has only topped 100 MLB games once. He’s also coming off a year where he played just 35 games, and his career OBP is a measly .283.

That’s a lot of negatives for a player to target in a trade, but Mondesí has a lot going for him. He’s a truly outstanding athlete and defender who would be spectacular at either second or third. He also has a Teoscar Hernandez-like combination of power and speed. In 2021, he posted max exit velocity and Sprint Speed numbers 85th percentile or better.

His speed isn’t just a theoretical asset either, as he ranks fourth in the majors in steals since 2018 despite playing at least 187 fewer games than each of the players above him.

The power has been harder to tap into for Mondesí, but his .185 ISO over the past four years is solid, and there’s clearly more there. He would be a high-variance option for a Blue Jays team that arguably needs certainty, but the ceiling is tantalizing — and the emergence of Nicky Lopez, plus the rise of the Detroit Tigers, has put the Kansas City Royals in a position to deal him. For all his flaws, Mondesí’s career WAR/600 PA is 2.9.

Even in a worst-case scenario where he slumps offensively enough to be unplayable as a starter, he’d be arguably the best defensive replacement/pinch runner in the game. According to this plan, the Blue Jays send good-contact, no-power infielder Jimenez the other way as a relatively high-floor prospect for the Royals, and Dutch pitcher Robberse as a more of a high-range-of-outcomes wild card.

Pineda fills out this path as a back-end starter who’s as unexciting as humanly possible, but he has a 3.80 ERA (and 3.93 FIP) in 282 innings since 2019. His price falls from the deal he signed prior to 2021 ($10 million) because he’s a year older and his velocity fell off this season while his contact management numbers faltered, even if the results (3.62 ERA and 4.21) were solid.

Advertisement
Related Topics:addressingBlueJaysOffseasonremainingroadmaps
Up Next

Friday Four: Should Drew Doughty be on Team Canada for the Olympics?

On “Fast thoughts with Bob Pockrass”, Pockrass discusses the Busch Light Clash at the Coliseum.

Joey Logano took blame for getting into Kyle Busch at the Busch Light Clash at the Coliseum. He was glad that Busch was able to make another run at the front.

Denny Hamlin spoke about the collisions that took place at the Busch Light Clash at the Coliseum and said it’s hard to point fingers.