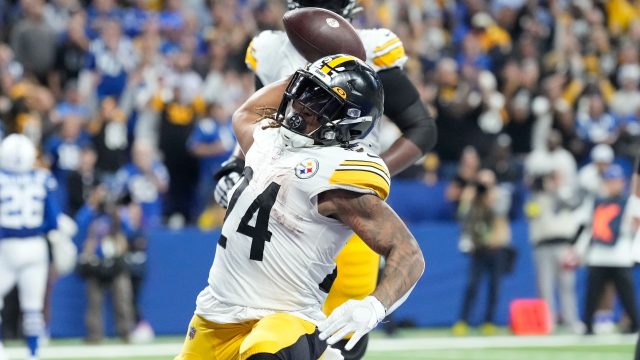 There are the teams you’re born rooting for, for better or worse, and then there are the bandwagon clubs — the franchises and star players that pique your interest, draw you in and drop you off. Each week of the 2022 season, we’re recapping some of the most encouraging and discouraging developments from around the NFL and deciding whose bandwagon to hop on or off — even if only for a week.

From gutsy calls that paid off in the end to late-game meltdowns, Week 12 brought the drama. Here’s what caught our attention — good and bad — over the weekend and what we’re watching for in the week to come.

Going into their matchup against the Saints, one of the big stories around San Francisco was just how solid their defence has been — particularly in the second half of games, having gone three straight contests without giving up a single point in the third or fourth quarter.

And then they went and one-upped themselves, denying New Orleans a single point all game. The shutout victory means they conclude the month of November having given up just 26 points in three matchups.

Overall, the unit is averaging a league-best 15.7 points allowed per game. That they’re also leading the league offensively with 29 total touchdowns just feels unfair at this point, doesn’t it?

Hopping off: Baltimore in close games

After struggling through some early-season injury woes on defence, and setting a precedent of giving up games late, the Ravens looked like they’d ironed out the wrinkles in time to run away with the AFC North. But Sunday against Jacksonville, riding a four-game win streak, Baltimore’s history came back to haunt them.

Leading by two possessions in the fourth quarter, it looked like the Ravens had this one wrapped up. It looked like that again with about two minutes left when, after a Jaguars score, Baltimore put up another touchdown to maintain a healthy lead.

Of course, we know what happened next: Trevor Lawrence happened.

Baltimore’s inability to close out close games is, clearly, an issue this season. And while it speaks to the talent of this club that they haven’t suffered any blowout losses, it’s a troubling trend that’s re-emerging at the worst time.

With Cincinnati heating up, Baltimore cannot afford another loss like this one.

Hopping on: Lawrence showing why he was a first-overall pick

Of course, we can’t blame Baltimore for the loss without praising Lawrence for the win. Sunday saw some bold choices in Jacksonville — and no, we’re not referring to the mascot in a speedo.

Lawrence put up the best numbers of his career and, when it mattered most, he looked every bit the franchise-changer he was billed to be when the Jaguars drafted him first overall in 2021.

The biggest testament to his development, though? Head coach Doug Pederson’s call for a two-point conversion to win the game with seconds to go rather than kick for the tie.

There’s no better vote of confidence than that.

If Lawrence stays hot, we can point to this game as the turning point.

Hopping off: Taking out your head coach

The Rams have run into some of the worst injury luck this season, exacerbating their post-Super Bowl struggles. Head coach Sean McVay looked like he could’ve been added to the long list of IR players when tight end Roger Carter Jr. accidentally blindsided the bench boss while putting on his helmet and running onto the field, catching McVay with a hard shoulder to the jaw and sending his headset flying.

No Ram is safe this year.

Here we go again! We’ve been on this bandwagon before — just last year, in fact, when Jets backup Mike White stole the show (and for a few weeks, the starter’s gig) in New York with a 405-yard, three-touchdown outing to lead the Jets over the Bengals in his first career start.

White got his first start of the 2022 season on Sunday in place of a benched Zach Wilson, who didn’t dress despite being healthy, and he once again put up some pretty electric numbers. The 2018 fifth-rounder (Dallas) completed 22 of 28 passes for 315 yards and three touchdowns with no interceptions and a league-best passer rating of 149.3 as the Jets cruised to a 31-10 victory over Chicago.

Wilson has thrown just four touchdowns all season and has never thrown three in a single game — something White has done twice now.

But if we’re going to reflect on the similarities between last year and this, we should also look at what came next: Last year’s ride was short-lived, as White followed up his three-TD effort with a 95-yard game a week later then a dismal outing against Buffalo in which White threw four interceptions and spent the rest of the season on the sideline.

The Jets take on Minnesota on Sunday — head coach Robert Saleh has yet to officially name his starter for that one — and then it’s… oh. Buffalo.

Hopping off: Playing against a Josh Jacobs-led fantasy team

We’ve got a new rushing leader in the NFL. Josh Jacobs, who’s been in top form for much of this season with the underperforming Las Vegas Raiders, had himself a day Sunday in Seattle, tallying a whopping 229 yards and a touchdown, plus another 74 yards receiving.

He saved the best for last, posting an 86-yard touchdown run in overtime.

Can he stay healthy enough to do it all again in Week 13?

Advertisement
Related Topics:bandwagoneliteHesJaguarsLawrenceNFLprovingReportTrevor
Up Next

England advances, look back in form after beating Wales at World Cup