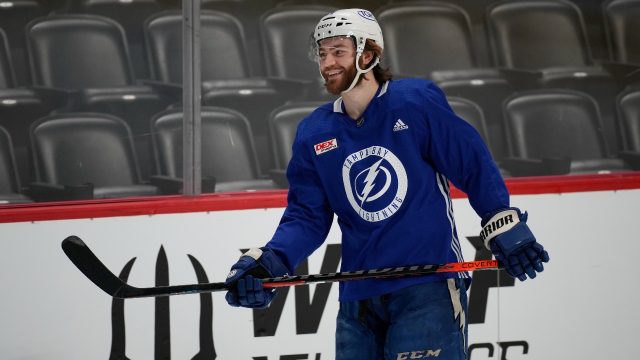 No matter how many times he told the story, Jim “Bearcat” Murray always ended one of his most harrowing tales with a glint in his eye and a smile on his face.

“Only trainer in NHL history to be plus-1,” he’d say, proudly.

In a recent chat, looking back at his improbable journey to being the most famous head athletic trainer in NHL lore, the man known around Southern Alberta as The Little Potlicker from Okotoks lit up when asked about one of the many nights his legend grew.

“Bernie Nicholls punched Vernie (Flames goalie Mike Vernon) and down he went like a ton of bricks – it didn’t look good,” said Bearcat of a playoff incident against LA en route to the Flames’ famed 1989 Cup run.

“The ref had his hand in the air and I thought, ‘this is going to be called.’

Joel Otto grabbed Nicholls and started a ruckus, the ref’s arms went down and I thought the whistle would go, so I just hit the ice and started running.

“I get to Vernie and he says ‘I’m fine, just trying to draw a penalty.’

“Suddenly I heard screams, and when I looked down the ice there’s the ref skating towards the penalty box and our guys are skating around with their sticks in the air. We scored.

“I said, ‘Mike, the whistle never blew, we’re in trouble.’

After trying to shield himself behind Vernon, Bearcat tried unsuccessfully to scamper from the scene unnoticed, hoping the goal wouldn’t be called back and a penalty assessed.

“On the way off the ice I could see Gretzky leaning out of the box, beating the boards with his stick and raising hell,” said Bearcat, an animated storyteller.

“I’m doing my little prayers and saying, ‘please let him shut up.’ Just as I finished I heard the ref say, ‘Gretz, shut up or you are out of here.’

“I got away with it.

“I was one lucky Potlicker.”

That’s how he described his life too.

Bearcat died on Tuesday morning, three days after being injured in a fall at his Okotoks home.

News of his passing spread around the Flames community fast, and hit hard, speaking volumes of the impact he had on a community he embraced like no other.

Well past the 1980-1996 window in which he oversaw the Flames dressing room, his infectious personality and unique look made him a household name in Southern Alberta – a popularity he built on long after retiring to be a team ambassador.

“Not only did he play, but he started auctioneering for a lot of those events. He would referee charity hockey games. Just like he did as a trainer who was sought after by Olympians and rodeo guys, he’d do anything to help. Talk about a guy who was inclusive. Whether you were a callup or a star, he made everyone feel important.

“He was the father figure who cared so deeply about you mentally and physically.

“His reach in southern Alberta had most people feeling like they knew him.

“You’re going to have to have the service at the Saddledome because thousands of people are going to want to pay their respects.”

Stay tuned on that one.

“I was talking to his son, Al (known as AlCat when he worked alongside his father with the Flames), and he said this morning, ‘Knowing dad, he’d want the biggest funeral and maybe even a parade,’” chuckled Lanny McDonald while on his way to see Bearcat’s wife Shirley Tuesday.

“Being a jockey, working in the oil field and becoming a trainer, he always wanted to be the best. He was the guy who put the spikes in his shoes so he could fly across that ice.

“He wasn’t formally trained, so you couldn’t do it today, but he read a ton and you had this trust and faith in him just because of who he was that he could patch you back together and fix you.”

Ask anyone who ever knew him, he always had your back, as was evidenced the night son Al jumped into the stands in Edmonton to rescue a stolen Gary Suter stick.

As things started getting ugly with the fans, over the glass jumped Bearcat to help his son, tearing ligaments upon landing.

As he was stretchered out of the rink, he blew kisses to the camera, growing the legend of a man whose red track pants, white sweater, spiked shoes and domed look gave birth to several fan clubs around the league.

“In Boston, Montreal and everywhere we went on the east coast there would be five or six guys dressed up as Bearcat with tufts hanging out of skull caps, a big mustache and that track suit,” laughed McDonald, aware an appreciative Bearcat often met up with such supporters afterwards.

“How many trainers have their own fan club around the league?”

That’s the kind of notoriety that helped land the personable native of Vulcan, Alta., in the Hockey Hall of Fame in 2009, one of six such Halls he’s enshrined in, including the Alberta Sports Hall of Fame.

A serial yodeler who was always game to lighten the mood or spice up an auction, Bearcat could often be seen trying to stay in shape in rinks around the league by roller-skating around the concourse with his Walkman on.

It was a sight powerful enough for Joe Nieuwendyk and Paul Ranheim to show up at the team’s Halloween party one year dressed as Bearcat and his son.

“It was hilarious, but then, so was he,” said Vernon, of a man who got his nickname and Potlicker tag from his father, Alan.

“He was a character. So passionate. He just cared, he cared about everybody. His personality just rubbed off on people.

“He had nothing but energy and always had a smile.”

It helped lift the players, it helped entertain the fans.

He was MacGyver before MacGyver, searching high and wide before landing on the perfect spikes to implant in his training shoes.

“In a team environment it’s critical to have someone who is always positive, never had a bad day and will do virtually anything possible to help out along the way and keep you in the lineup,” said former Flames GM Al Coates, who was part of the management group that decided to hire the long-time trainer (and often bus driver) with the Calgary Centennials, Wranglers, Cowboys and Stampeders when the franchise relocated from Atlanta.

“He was one of a kind. He had one of those personalities where he was exuberant all the time.

“I can still see him jumping up and down on the bench, so excited for others. It wasn’t about him. He was truly excited about the success of others.

“There are people whose personalities just leap out of people and with the advent of TV people saw that. Just like the late Ed Whalen, he was very unique to Calgary and Southern Alberta.”

In life, he finished plus-1.

“We chuckled about that night for a long time, but we weren’t confident right away,” said Vernon.

Throughout his life he’d already racked up millions of them.