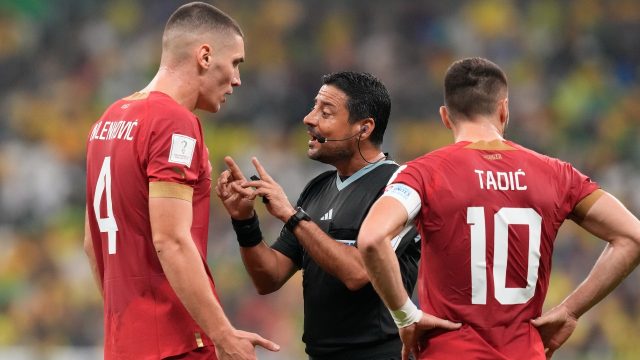 DOHA, Qatar — Croatia coach Zlatko Dalic sent Canada a message Saturday at the World Cup. And he didn’t need the F-word to deliver it.

Dalic offered up a stern statement when asked about John Herdman’s emotional words after Canada’s 1-0 loss to Belgium on Wednesday.

Asked in a pitchside interview what he had said to his team in a post-game huddle, the Canada coach replied: “I told them they belong here and we’re going to go and eff— Croatia. That’s as simple as it gets.”

While Herdman delivered the last line with a smile, Dalic clearly did not see the humour.

When a Canadian reporter at Saturday’s pre-game news conference asked Dalic for his team’s response to Herdman’s heat, the Croatia coach lectured his opposition ahead of Sunday’s showdown at Khlalifa International Stadium.

Dalic used the world “respect” 12 times in his answer.

“The Croatian team deserves respect from everyone. We respect everyone, equally so,” he said through an interpreter. “We expect our opposing teams to respect us. We are worthy of their respect. The Canadians must also have respect for us. This way of putting words together is not a sign of respect. We are the (2018 World Cup runners-up), not Brazil, Spain or other countries.”

“I shall not focus or comment on any other people’s comments,” he added. “We will be prepared (Sunday), we will be fit and we will demonstrate respect for Canada and for everyone else. We expect respect just as we exercise this view”

Croatian forward Ivan Perisic then backed up his coach, saying simply: “I second the head coach and I cannot wait for the match to begin.”

Sunday may prove otherwise but it seems, motivationally speaking, Canada has taken a knife to a gunfight.

Both the 41st-ranked Canadians and No. 12 Croatia need to get points out of the match. Belgium tops Group F with three points while Croatia and Morocco both have one point after their scoreless draw.

Canada needs to secure at least a point if it hopes to have any chance of reaching the knockout round. A loss Sunday and the Canadians can finish with no more than three points while Croatia ups its total to four. And no matter what happens in Sunday’s match between No. 2 Belgium and No. 22 Morocco, one of those teams will have at least four points.

With only two teams advancing out of the group, that would render Canada’s final group game next Thursday with Morocco meaningless in terms of tournament progression.

“At the end of the day, both teams really have to win this game,” said Herdman.

Croatian reporters didn’t bother engaging Zlatko on Herdman’s inflammatory words. They had already done so, with tabloids back home having a field day.

In contrast, three of the first four questions in Herdman’s availability were about his post-game hot take. Another came later.

The Canada coach, who had already addressed the issue on Thursday, tried to laugh off the reaction he had sparked in the Croatia camp.

He insisted he was on task “and loving the experience.” And he rejected the assertion that his words were just another motivational tool.

“We’ve been waiting 36 years to get here. I’ve used all my motivation tactics in the 20-odd games it took to get here,” he said in self-deprecating fashion.

But he maintained his words to his players in the post-game huddle after Belgium were simply “to remind them that there’s another task ahead.”

And he was quick to compliment Croatia, calling it a “top top top top football team.”

Herdman called Sunday’s match a “defining moment for Canada in this World Cup. It’s one of those do-or-die games now that we have to perform in to stay at a World Cup.”

The two sides have never met before.

The Croatian roster features the likes of Luka Modric (Real Madrid), Perisic (Tottenham), Marcelo Brozovic (Inter Milan), Mateo Kovacic (Chelsea) and Mario Pasalic (Atalanta). Only six of its 26-man roster play at home in Croatia, with four of those at Dinamo Zagreb.

Despite that talent, Croatia had its hands full with No. 22 Morocco in its tournament opener, playing to a scoreless draw in a game that saw each team put just two shots on target.

Croatia goes into Sunday’s match riding a seven-game unbeaten streak (5-0-2) dating back to a 3-0 loss to Austria in June in UEFA Nations League play. Croatia avenged that defeat with a 3-1 decision over the Austrians in September.

Croatia has outscored the opposition 9-3 over that run, which includes a win and tie against No. 4 France.

Advertisement
Related Topics:AheadCanadacoachCroatiaCupmessagesendsShowdownsternWorld
Up Next